Right now, I am a bizarre mix of bubbling excitement punctuated with brief flashes of terror. It’s too early to say much more, but there will be details coming soon. Lots of details. I promise. And a fantastic launch party. Stay tuned!

YODA: “When ninety-eight years old YOU reach, look as good YOU will not, hmm?” 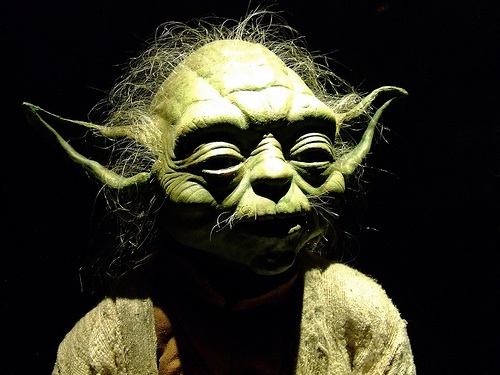 In case you didn’t know, Stuart Freeborn is the makeup artist who created some of the most iconic and magical Star Wars characters…like Yoda & Chewbacca. Stuart enjoyed an incredible career in sci-fi makeup artistry before he walked onto the Star Wars set. I refuse to be sad about this. This is a man who lived his creative dreams and inspired thousands of others…and that’s a long life well-lived. Bravo! 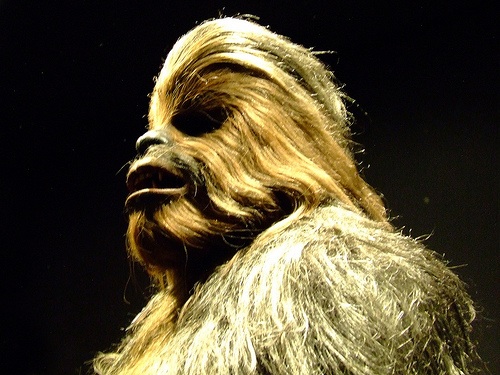 When the weather outside is this frightful 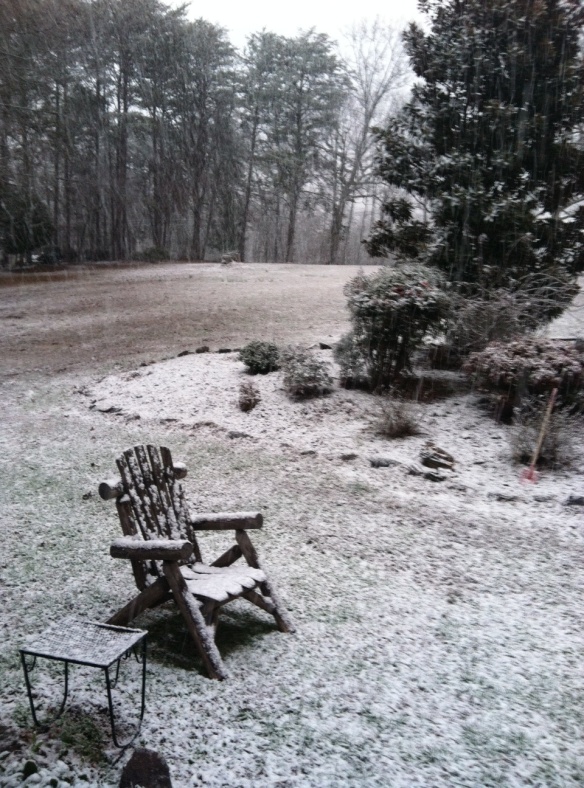 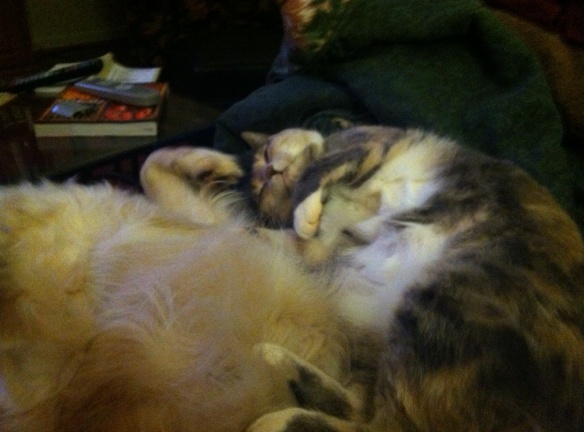 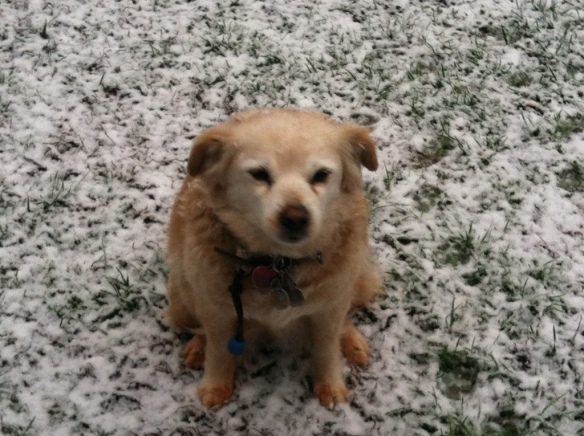 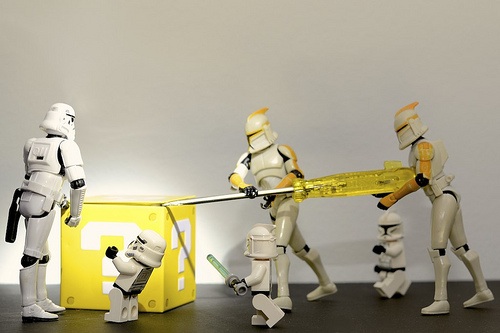 First, I should explain that I have never ever, not one time, watched an entire episode of ANY television program created by J.J. Abrams. Felicity, Alias, Lost – all of them came and went away and I managed to miss every single episode.

Which is SHOCKING for a self-proclaimed pop culture geek girl who was addicted to television for the first 30 years of her life…or maybe not. Television addiction is NOT a weakness that a person with a demanding full-time corporate job and a burning desire to write novels can afford to indulge. So I made the decision about 8-10 years ago not to get sucked in to any television shows that require a commitment…the kind with unanswered questions at the end of every episode designed to drag you back to the TV every single week to find out what happens next. Hence, why I do not watch Downton Abbey even though everyone I know is amazed that I don’t watch it because if there would be a show for me to be addicted to, it would be that one.

Sure, I still waste plenty of precious hours and days in front of the tube, but I try to stick to shows that have a complete and finished story arc in every episode (i.e. Law & Order, House Hunters or Chopped). No more “Who shot JR?” cliffhangers for me, thank you very much. (The one exception to this non-addictive TV rule is Project Runway, which I love and adore and will never give up.)

Ooops…wait, I’ve gotten a wee bit off-track here. What am I supposed to be writing about again? Oh yeah, J.J. Abrams! This is a post about J.J. and me and synchronicity.

That story starts in 2007. I was living in California and suffering a great deal over multiple unresolved life issues but, most especially, I was suffering over an unfinished novel about Star Wars geekery and Super 8 filmmaking that had been languishing in a drawer for too long. One day I saw a post on the official Star Wars blog, that said something like, “Hey, have you seen this great TED Talk where the Lost creator talks about Star Wars?”

Always on the lookout for a little non-productive time wastery, I clicked over to watch the clip. The full talk is over 18 minutes. I watched only the 30-ish seconds about Star Wars and thought, Huh? What’s so great about that?

So, of course I had to watch the whole thing. When I got to the part where he talked about his grandfather buying him a Super 8 camera (2:43 – 3:25), I was gobsmacked. I sat there rewinding and replaying that part five or ten times. It felt like the universe had just reached out, slapped me upside the head and told me to pull out that novel and get it finished.

Which is synchronicity #1. (If you don’t see the synchronicity, don’t worry. According to this book, whether or not something is a synchronicity is entirely dependent on the perception of the person who experiences it.)

So, after watching that TED Talk, I had a very special place in my heart for J.J. Abrams and not just because he mentioned SW in a talk. I loved his Mystery Box concept and started applying it to my writing…but I still didn’t watch anything he had created.

Then came Cloverfield. Even though I was strangely ambivalent about seeing that movie, I put it near the bottom of my NetFlix queue just in case I was ever in the mood for a scary monster movie. I still don’t know how that title got moved to the top of my queue. Most likely, I meant to move up something above or below it. Anyway, I ended up with Cloverfield on a weekend when Mike was out-of-town and I planned to sit around in my pajamas with Zoey watching girly movies and eating junk food. After a serious consultation, Zoey and I agreed to start the monster movie first…with the understanding that we could cut it off if we were not enjoying it. (Kitty cares deeply about the movies we watch together as she does NOT appreciate me being too tense &/or jumpy when she is expecting a relaxing snuggle on the couch. Hysterical laughter is also not appreciated.)

Well, I LOVED Cloverfield, especially the fact that the entire movie is shot as though one of the characters is filming the events. I mean, I’m not going to hold it up as some great and powerful example of everything a movie should be but I thoroughly enjoyed every minute of it. I remember thinking, this storytelling device with the camera is like the equivalent of an epistolary novel. And I LOVE epistolary novels as is clearly evident by the fact that I’ve written an epistolary novel and…BAM!

A couple of years later, I was at the movie theater to see something, I don’t remember what, and noticed this poster: 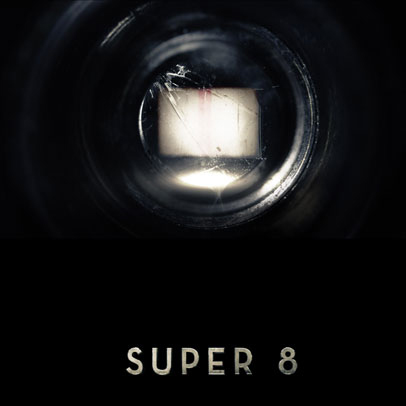 Isn’t that the most awesome teaser poster? The cracked lens with the oh so subtle hint of blood…genius! As I stood there mesmerized by this poster, three thoughts chased each other around my brain:

Cut to the chase…I absolutely adored Super 8! It’s like Stand By Me meets Alien. And, no, it is nothing like my story at all. I personally think Super 8 is J.J. Abrams best work to date with the full understanding that I have not actually seen most of his work.

After seeing Super 8, I was re-energized to go back and listen to that TED Talk again. And what do you think I noticed that I never noticed before? That whole section where he talks about the democratization of filmmaking which makes me think about the evolving world of independent publishing which is, yes, another synchronicity (#4).

Oh…a brief aside here, something I have not mentioned before…I actually like Star Trek. The original series (who doesn’t love Spock and Scotty?), the original movies, Next Generation and, yes, I enjoyed the recent reboot…lens flares and all. Even though Star Wars is my first and dearest love, I do not understand this concept that there is a huge divide between the two fan groups. I have some lovely Trekkie friends.

Okay, now back to this rambling story about J.J. Abrams. I didn’t know he created the new Star Trek (we watched it on DVR and didn’t bother to watch the credits). When the big news stories about Disney purchasing Lucasfilm and a new trilogy in the works were flooding my internets, my very first thought (after sheer sickening panic) was, I’d vote for J.J. Abrams to direct. I honestly don’t know why I thought that other than his love of 1970’s and old-fashioned Super 8 films makes me feel all warm and bubbly inside. But then I discovered the general consensus was that we could all count him out because he was doing Star Trek movies.

Weeks go by. I was nearing the end of my rewrite and needed to find just one more quote about Star Wars and its lasting impact on my generation. I remembered J.J. Abrams said something I liked about that so I click on over to the internets to Google JJ Abrams Star Wars quote and…KAPOW!

I think we are on Synchronicity #5. This one just about made me cry, which is stupid, I do realize that, but I was a stressed out train wreck and all of a sudden I got this wink from the universe. Obviously, I’m using his quote in my book. And that’s where I’ll end this crazy rambling mess of a story.

“Star Wars is probably the most influential film of my generation. It’s the personification of good and evil and the way it opened up the world to space adventure, the way westerns had to our parents’ generations, left an indelible imprint. So, in a way, everything that any of us does is somehow directly or indirectly affected by the experience of seeing those first three films.”

So what do you think? Do you ever feel that magical rush of synchronicity? Do you love mystery boxes as much as J.J. & me?