As you can see, my two special guest stars made this such a fun event. I cannot thank them enough!!

Last night’s experiment in Star Wars confectionary treats was not exactly photogenic…but I assure you the result was delicious!

As it turns out, in addition to Chewie, one of the boys in white was able to attend my book launch event. Here he is with my book: 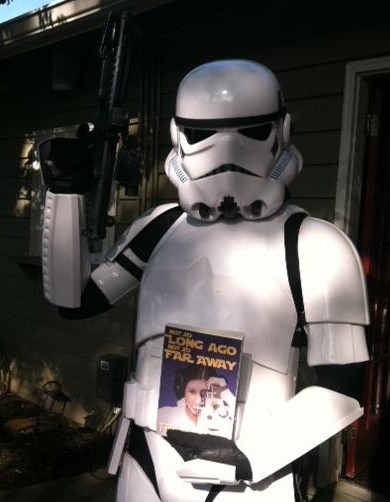 A Vietnam veteran and his wife spotted the Stormtrooper’s glossy white personage, not to mention the seven-foot-tall fuzzball in his custody, while driving by the coffee house and rushed in for some photos. I overheard our disconcertingly friendly Stormtrooper (in appropriate comlink voice effects that make him sound EXACTLY like the troopers in the movies) say, “Thank you for your service” to the veteran. And this big, gray-haired veteran with a smile from ear-to-ear replied, “And thank you for your service. You’ve made my day!”

Teared me up! So I’m posting this to say Happy Memorial Day to everyone, but most especially to ALL of our veterans, and may the Force be with you…always.

NOTE:  There are many more fun photos of the event, including plenty of Chewie and yours truly. I will post them all over – here, Goodreads, Amazon, Facebook, etc – very soon. However, we’re going to take a day to unplug and go hiking. Have a safe, fun and refreshing weekend!

Sometimes giving in to the dark side can be delicious…. 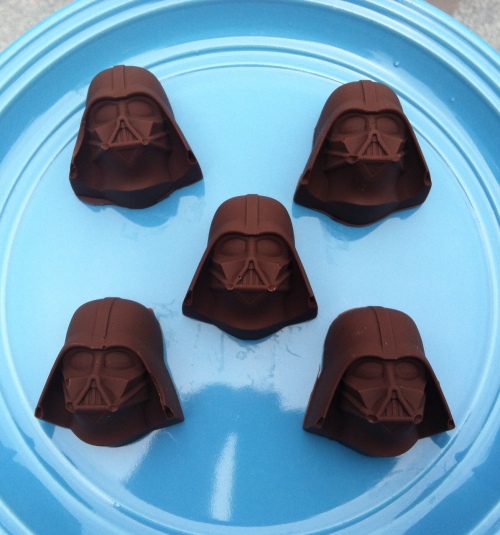 These luscious Dark Vader chocolates will be one of the possible “gift with purchase” options at my Book Launch event tomorrow evening at Land of a Thousand Hills Coffee in Roswell, GA. Which is convenient. Because these dark Sith lords taste even more dark and delicious with an Iced Toddy or Vanilla Chai Freeze. 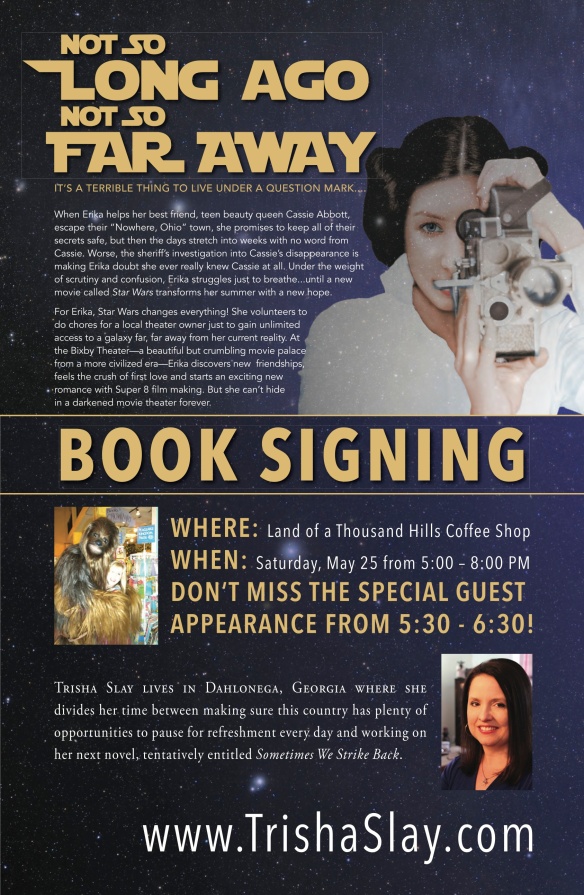 Post a comment over at Faster Than Kudzu before FRIDAY at Midnight, EST, and you could win a SIGNED COPY of my book.

Don’t let this guy get all the credit and claim all the reward:

Today will be a day long remembered…it has seen my beloved book officially released into the big, wide world AND we are being featured on Faster Than Kudzu – the blog of NYT bestselling novelist Joshilyn Jackson. Joshilyn is one of my most favorite authors and I’ve been following FTK blog for years, so this is VERY exciting for me.

Click here to check out my interview and for a chance to win a free copy of the book! 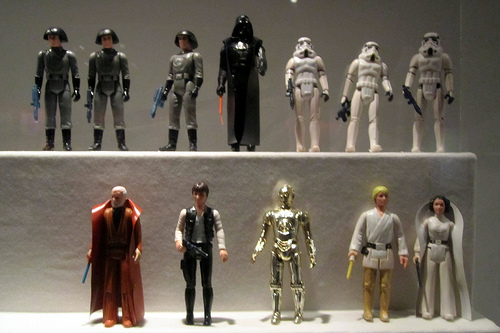 “People are still asking me if I knew Star Wars was going to be that big of a hit. Yes, we all knew. The only one who didn’t know was George.”

Hey! Why are you still here? Go check out Faster Than Kudzu. See you back here soon.

Back in 2007, when I was struggling through the original draft of NSLA, NSFA, I posted a plea for information about working in a historic theater in 1977 on the Cinema Treasures website. I received lots of assistance in response to my post. (Read my original post and all responses here.)

The hilarious “70’s Flashback” comment by AlAlvarez was an incredible inspiration that sent me running back to my manuscript full of ideas. I laugh out loud every single time I read it. So I’m going to share an abridged version here in case anyone else thinks what Al wrote is as interesting and entertaining as I do.

In the mid seventies, if you were working for a theatre chain, it was all about cutting costs and not reinvesting in theatres. It was mostly about managing an unstable audience and staff in a crumbling building. Here are some memories…as a manager around 1977 that may spark your imagination:

Thank you AlAlvarez! You are a gentleman and a cinema treasure in your own right!

Look at what I made:

Star Wars gift soaps. Aren’t they adorable? I don’t care how old I am, it’s still a thrill to lather up with Han Solo or the Millennium Falcon (*smiles innocently*). If you agree, you probably want to know how you can get your hands one of these.

Before the realization spreads deeply into Zoey’s consciousness that monumental and wondrous events are taking place in my life and the world as we know it will never be the same.